A Court of Thorns & Roses by Sarah J Maas 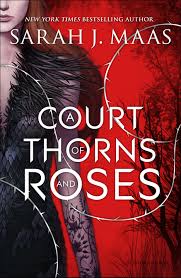 Title: A Court Of Thorns And Roses

Author: Sarah J. Maas
Genre: Young Adult/New Adult, fiction, fantasy
Pages: 421
Publisher: Bloomsbury
Format: Hardback
Synopsis: When nineteen-year-old huntress Feyre kills a wolf in the woods, a beast-like creature arrives to demand retribution for it. Dragged to a treacherous magical land she only knows about from legends, Feyre discovers that her captor is not an animal, but Tamlin—one of the lethal, immortal faeries who once ruled their world.
As she dwells on his estate, her feelings for Tamlin transform from icy hostility into a fiery passion that burns through every lie and warning she's been told about the beautiful, dangerous world of the Fae. But an ancient, wicked shadow grows over the faerie lands, and Feyre must find a way to stop it . . . or doom Tamlin—and his world—forever. (Goodreads synopsis)
Review:
This is my second time reading this wonderful masterpiece and once again I was captured right from the start. Sarah's world building is on point, I am always left with a clear image in my mind... and boy do I wish I lived in this world haha. One character in particular that I love is Lucien, he is down right hilarious and I found myself constantly laughing. I think that's something super important in a book, it can make you laugh but not just in your head but out loud. This book is the kind that you want to read in one sitting. ACOTAR has a bit of everything, its got action, romance, suspense, mystery. What more do you need?
If I had to say anything bad about this book it would be that in certain scenes Feyre would talk about Tamlin and how "gorgeous" he is and his muscles. It just got a bit excessive and yeah I get he's attractive he's high fae but learn when to stop haha.

This is a book that I highly recommend, I actually enjoyed it a lot more that throne of glass dare I say. Even if your not that big into fantasy and love romance, pick this up because once you start reading you wont be able to stop and let me tell you. A Court Of Mist And Fury is even more phenomenal.

Posted by Jordypaigebooks at 00:00 No comments:

The Road To Winter by Mark Smith 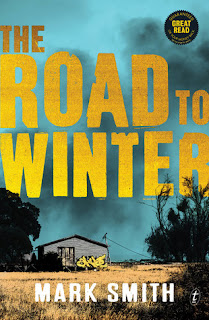 Title: The Road To Winter

Author: Mark Smith
Genre: Young Adult, fiction, post-apocalyptic
Pages: 240
Publisher: Text Publishing
Date Released: June 27th 2016
Format: Paperback
Synopsis: Since a deadly virus and the violence that followed wiped out his parents and most of his community, Finn has lived alone on the rugged coast with only his loyal dog Rowdy for company.
He has stayed alive for two winters—hunting and fishing and trading food, and keeping out of sight of the Wilders, an armed and dangerous gang that controls the north, led by a ruthless man named Ramage.
But Finn’s isolation is shattered when a girl runs onto the beach. Rose is a Siley—an asylum seeker—and she has escaped from Ramage, who had enslaved her and her younger sister, Kas. Rose is desperate, sick, and needs Finn’s help. Kas is still missing somewhere out in the bush.
And Ramage wants the girls back—at any cost. ( Goodreads Synopsis )
Review:
The Road to winter was a well paced and fun read. It didn't take long to read at all. This book gave me a lot of Tomorrow when the war began by John Marsden vibes but was also different in so many ways which is awesome because there are some books i've read and you really have to think if you've already read the book as it sounds so familiar. One thing you should take into consideration if you decided to read this, it is apart of a series which I didn't realise until I had almost finished the book, oops.  If you are someone who enjoys a good post-apocolyptic read then this one is for you or maybe you've never ventured into this kind of genre before and must say it's a good place to start!


Warning! Some minor spoilers ahead!


Now to go into a bit more detail. In the book it talks about this virus that has killed so many people, it's been 2 years. So where is the Aid? Is nobody going to help them out, and what caused the virus in the first place. So many questions. Rose seemed to use Finn a lot and she never seemed to tell him the full story.

Rose's character for the most part got on my nerves, I can't fully explain it but one of the main things that irked me was when she would call Finn "Dog Boy". I would hate someone giving me a name like that.
Something that I didn't pick up on and honestly I don't know how I didn't was Rose being pregnant. It was basically spelled out for me to but I just didn't see the signs.

I quite liked our main character Finn, he didn't make to many rash decisions and he was quite mature for his age. He knew how to look after himself and he didn't let his situation get the best of him. I also really liked to read Kas' character, I never saw her as a damsel. She could take care of herself, Kas was pretty awesome.

Two big question I hope will get answered in the next book is Will Willow get reunited with her Parents? Are they dead? Also how in the world are they going to get Rose's baby back?

Overall I quite enjoyed this and I will definitely look out for the next installment.
Posted by Jordypaigebooks at 16:00 No comments: 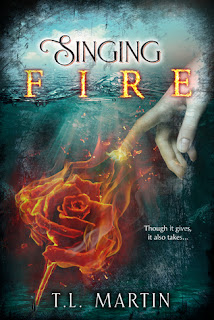 Author: T.L. Martin
Genre: Paranormal/Fantasy/Young Adult
Pages: 296
Publisher: ???
Date Released: November 27th 2016
Format: Ebook
Synopsis: Constant chills, panic attacks, and now paranoia – there’s a reason seventeen-year-old Charlie keeps to herself.
Life is looking up when she gets a job at a whimsical tea shop and gains a few new friends, but little does Charlie know there are secrets lurking beyond its door.
It only takes one night for her perspective on her small town to change forever. As if witches, vampires, and demons weren’t enough, she soon realizes she’s being hunted for a power she didn’t know she possessed.
Singing Fire takes Charlie through an unexpected journey of self-discovery, betrayal, and forbidden love all while the clock is ticking for her to defeat the dark souls pursuing her – before anyone else dear to her has to die. (Goodreads synopsis)

Note: I was sent a review copy in exchange for a honest review
Review:
I really enjoyed the writing as it was super easy to get into and I rarely found myself wishing the pace would speed up because majority of the time it was awesome. The world building was also really well done. It made me feel as though I was actually there, I couldn't imagine it in my head so early. Something that I really enjoyed was that the main character Charlie struggled with panic attacks and she wasn't very good with social situations which I think was executed well. It was awesome to see Charlie's character grow and change into a more confident woman. Though there were times were I got annoyed with her character as she made a few rash decisions and was so fixated on being the hero that it got her into trouble.
Also on a random note.. At the start of the novel it mentioned how Charlie had 3 birthmarks behind her ear but then I don't remember it mentioning anything else about it through out the novel. Perhaps that will be explained in the next novel? Like why she is the opal.
One thing that I look for in a novel is an unexpected ending and T.L. Martin certainly delivered. The twist will definitely take you by surprise. I will definitely be looking out for the next instalment :)
If you love paranormal mixed with a bit of romance then this one is for you :)

Posted by Jordypaigebooks at 21:40 No comments: